We celebrate our first year of Public Programming with DJ Cardamami and an open bar, 6-8pm.

Timings are approximate
Registrations are not required.

An afternoon of readings and performances celebrates the opening of SIREN (some poetics), an exhibition devoted to technologies of myth and mouth, earth and alarm, gender and language. Surveying the siren as both ancient and contemporary warning system, the show presents the work of some seventeen artists and poets from disparate generations and geographies. Their myriad practices consider both human and nonhuman forms of poetics and language-making, from ancestral song and epistemological inquiry to bacterium choruses and Martian linguistics, from text to textile to spell to algorithm.

Quinn Latimer, curator of SIREN (some poetics), offers a short introduction to the exhibition and a reading, followed by a discussion by Hana Noorali and Lynton Talbot—curators of The Noon Sirens, the accompanying online program—about the acoustic experience of present political struggles. They are followed by poets and writers Mirene Arsanios and Lynn Xu, both of whom perform recent work. Liliane Lijn closes the afternoon with a reading from Crossing Map, her celebrated cult 1983 artist book of song-like narratives on memory and the material and immaterial body.

About the Participants
Mirene Arsanios is the author of The Autobiography of a Language (Futurepoem, 2022) and the short story collection, The City Outside the Sentence (Ashkal Alwan, 2015). Her writing has been featured collaboratively at the Sharjah Biennial (2017) and Venice Biennial (2017), as well as in various artist books and projects. Arsanios co-founded the collective 98weeks Research Project in Beirut and is the founding editor of Makhzin, a bilingual English/Arabic magazine for innovative writing. With Rachel Valinsky, she coordinated the Friday nights reading series at the Poetry Project from 2017–19.

Quinn Latimer is curator of SIREN (some poetics). She is a California-born poet, critic, and editor based in Basel, Switzerland, and Athens, Greece. Her books include Like a Woman: Essays, Readings, Poems (Sternberg, 2017), Sarah Lucas: Describe This Distance (Mousse, 2013), Film as a Form of Writing, with Akram Zaatari (Wiels, 2013), and Rumored Animals (Dreaming Horse Press, 2012). Latimer was editor-in-chief of publications for documenta 14 (2015–17). She is Head of the MA at Institut Kunst Gender Natur in Basel, Switzerland.
Liliane Lijn is an artist and poet whose work covers a wide spectrum of interests, from light and its interaction with diverse new materials to the development of a fresh image for the feminine. She has taken inspiration from incidental details both man-made and natural, mythology and poetry, science and technology. Her work was featured in the 59th International Art Exhibition of La Biennale di Venezia, curated by Cecilia Alemani, and has recently been the subject of solo shows at Rodeo, London and Pireaus, and Tate Britain, London. Since the mid-1960s, Lijn has lived and worked in London.

Hana Noorali and Lynton Talbot work collaboratively to curate exhibitions, texts, and live events. Together they have run non-profit exhibition spaces in London and Berlin, curated exhibitions in the UK and internationally, and have together published essays, texts, and articles for a range of publications and publishers, including ArtMonthly, Phaidon, and ArtReview. In 2019 they curated The Season of Cartesian Weeping as part of The Roberts Institute’s Curators Series, and in 2020 they co-edited Intertitles: An Anthology at the Intersection of Writing and Visual Art, published by Prototype Press.
Lynn Xu was born in Shanghai, China, and now lives with her family in New York City and Marfa, Texas. She is the author of And Those Ashen Heaps That Cantilevered Vase of Moonlight (Wave, 2022), Debts & Lessons (Omnidawn, 2013), and the chapbooks June (Corollary Press, 2006) and Tournesol (Compline, 2021). She has performed cross-disciplinary works at the Guggenheim Museum, The Renaissance Society, Rising Tide Projects, and 300 S. Kelly Street. She teaches at Columbia University and coedits Canarium Books.

Cardamami is a Brooklyn-based DJ. They draw inspiration from their Afro-Caribbean & South Asian roots. They are the co-host of Yalla Yeehaw, a party featuring Arab pop, Bhangra, & other Southwest Asian, North African, & South Asian sounds and the host of Spicy Trax, a monthly radio show for Playground Radio. 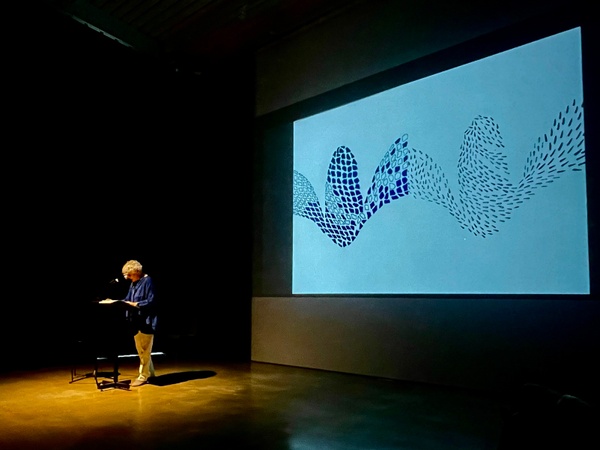