In this conversation artist Aura Satz and writer Daphne Carr consider the revolutionary potential of the siren, and how we may engage in a practice of “preemptive listening.”

“The siren is firstly a call to attention, secondly a call to action, and lastly, it faces forward. It hovers in the split-second before future ruins. The siren calls forth unravelling scars, some near and visible, others remote, imperceptible, buried in the deep future, unimaginable beyond this lifetime. Living across multiple scales of threat, how to disentangle immediate danger from long-term distant danger? But more importantly, how to recalibrate the siren away from the sound of trauma? Towards a sound that allows us to imagine otherwise, towards a future that is not mired in catastrophe.” (from Aura Satz’s “Preemptive Listening” included in the exhibition catalog)

This reading is organized in the framework of SIREN (some poetics), a group exhibition and a poetics devoted to technologies of myth and mouth, earth and alarm, gender and language.

Free and open to the public. Prior registration recommended.

Aura Satz’s work encompasses film, sound, performance and sculpture. Works are made in conversation and use dialogue as both method and subject matter. She has made a body of work centered on various sound technologies in order to explore language, notation systems, code and encryption, and ways in which these might resist standardization, generating new soundscapes, and in turn new forms of listening and attending to the other. Aura teaches Sound and Moving Image in the Fine Art department at the Royal College of Art in London.

Preemptive Listening (Part 1) is included in SIREN (Some poetics). For this experimental documentary feature film, Aura has been awarded an AHRC Research, Development and Engagement Fellowship in support of the ‘Preemptive Listening’. The project is also supported by a long-form cinema residency at the Walker Arts Center in Minneapolis, Sonic Acts (Amsterdam), Kunsternes Hus (Oslo), as well as various other partners.

ure at the Dox Centre for Contemporary Art, Prague.

Daphne Carr is a Youngstown, Ohio area activist, writer, editor, educator, and scholar who focuses on sound and social justice. She is completing a dissertation on the history of sound as violence in police sound technologies used in public order policing in the FAS music department of New York University, where she co-organized the Precarious Sounds, Sounding Sanctuary Conference as well as a successful series of workshops on unconscious bias training, upstander intervention, and academic upstander intervention.

She is a widely published journalist and cultural critic, author of Nine Inch Nails Pretty Hate Machine (Continuum), and essayist in a number of anthologies, including Out of the Vinyl Deeps: Ellen Willis on Rock Music. She has curated exhibits on music and culture including PLUR: The rise of electronic dance music in America at the Museum at Bethel Woods and Free Cult 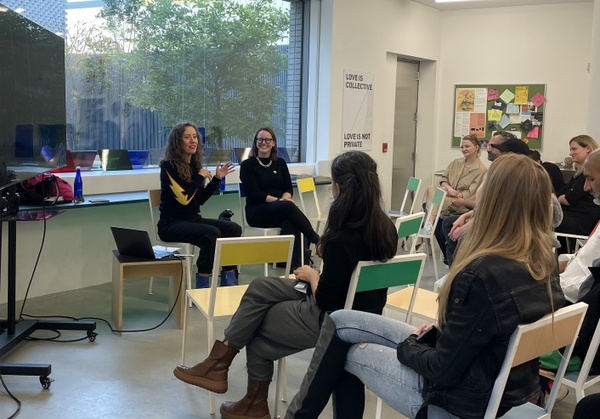 Study Line
Hearing Voices
Our Study Lines are the connective tissue between our events, collaborations with artists, publications, and our conversations with our community. We pursue open-ended insights that challenge understandings of art, art-making, and art’s impact in the world at large. We currently focus on Hearing Voices and Love Expanded Love Extended.
Explore Hearing Voices →
Related Exhibition
Exhibition